Today the spotlight slides onto the history of early user interface design.

A certain Steve Jobs some time ago mentioned the history of fonts on the Mac at the Stanford Commencement 2005 speech. Rumors of Jobs’ insatiable egoism notwithstanding, he laid claim to the existence of font technology on all computers. Of course, he didn’t actually design the appearance of the fonts so much as facilitate their implementation on the Mac. The initial design work was left to Susan Kare.

Susan Kare certainly has carved out her place in the annals of user interface design. Fortunate enough to design the well-made icons for the original Macintosh, she probably contritubed more than anyone could truly foresee to the popularity of computers today. Icons were a daring metaphor in a 1980s world of “serious” text and terminals, but the risk was well worth the reward. Ask any computer user today how legitimate icon-based interfaces are and you’ll always get the same affirmation. Everyone simply likes pretty things, and even more so when they help them get things done in an intuitive way.

Kare’s font credits include Monaco and the nostalgic original iPod font (originally “Elefont“, now known as the demised Chicago) Command Key flower. Kare even worked for Microsoft too on early versions of Windows.

P.S. Mac still has a few cool quirks with its typography engine (checked up to 10.4.2). Try opening up TextEdit, switching to the Zapfino font, and typing…”Zapfino” of all things. Cool. 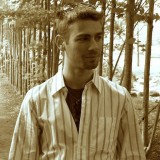